“Smart Agriculture” at the disposal of Greek Farmers 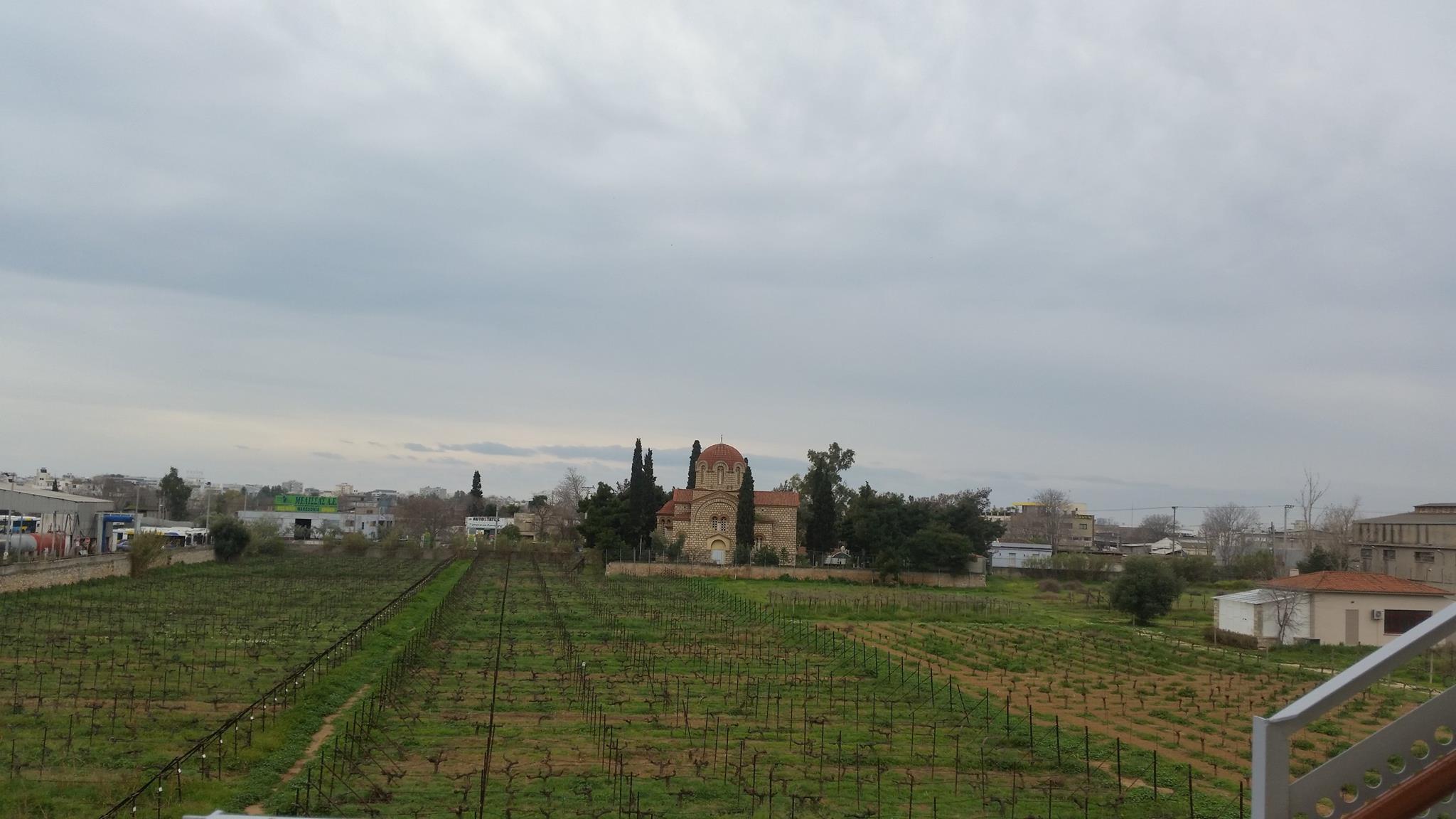 New technological advances enter the territory of the Greek farmers-producers, by the aid of the Agricultural University of Athens. The aim of the Institution is the generous support of the Greek agricultural production at hard times, in order to increase the output and profits, in addition to protecting the environment itself. The University will provide any assistance for the farmers, so as to help them acquire new knowledge and innovative tools, breaking away from the established, adopting a fresh perspective upon the ways of production, against the ones in use, so far, in order to make them competitive. Furthermore, the scientists of AUA, offering all the specialized know –how and expertise, are to contribute to the increase in the production numbers, while at the same time, yielding a decrease in expenses, fertilizers, medicine, water, energy and so on. Indeed, the first region, to be benefited from “Smart Agriculture”, shall be that of Central Greece.

Nowadays, becoming, eventually, a greater necessity, than any other time before, the Greek agricultural production, is in real need of strengthening by scientists, because it incurred, as a result of the general economic crisis, a reduction in demand and restriction of available funds, concerning its furher support and development. At the same time, it pays a much higher price not only, as the outcome of the  market instability, but also due to the effects of climate change, which markedly intensifies the frequency and the  severity of extreme weather conditions, and that furher leads to the limitation of the crop yield, the loss of production and an even more extended decline in agricultural income.

For the above reasoning, AUA has created the Innovation Hub in Smart Agriculture and Circular Bioeconomy, all over the building facilities, in the region of Central Greece. In the framework of a relevant call for proposal in the Action:“Reinforcement of Research and Innovation Infrastructure,” being funded by the Operational Programme, entitled “Competitiveness, Entrepreneurship and Innovation”, within the National Strategic Reference Framework (NSRF) 2014-2020 (EPAnEK), by the co-financing of Greece and the European Union, namely the European Fund of Regional Development, the Agricultural University of Athens, has submitted a pertinent proposal, which has been, actually, evaluated with excellence. On top of that, its implementation is to be realized, from December 2020.

As far as the Region of Central Greece is concerned, the primary sector, including agriculture and husbandry, conduces to a great deal of the flourishing of the economic growth across the area, as well as its being a major source of income and employment for a large number of its population, inasmuch being a decisive factor for the maintenance of the social and financial cohesion of its citizens. At present, the agricultural sector, not only in the Region of Central Greece, but also on a national level, is really, going through a “critical juncture”, which has been, seriously, affected by the international and european environment.

On the other hand, the enhancement of competitiveness of the agricultural products in Greece, and in particular, within the Region of Central Greece, requires improvement in the production methods for the manufacturing of secure, healthy and high quality products, generated under the protection conditions of the environment.

With reference to the pioneering effort made by the University, the Rector of AUA, Professor Spyridon Kintzios, highlights that “the establishment of the multifunctional nature of the Innovation Hub for agriculture, the purpose of which, is to be at the services of the whole productive community of Central Greece, with individual units functioning, across Aliartos, Thebes and Amfissa, proves to be a quite ambitious project, with impacts of a national range, as regards the new models of agricultural production. In such a dynamic way, AUA sets the new technical framework, for the smooth transition of Greek agriculture, to the after covid era, in fact, “a greener season to come”. In the light of such a fruitful project, the most advanced technological developments, are to be implemented upon the greek ground for the first time in the history of agriculture, especially, in the fields of intelligent agriculture, the application of biosensors, as well as the use of traceability systems, through the composting and biostimulants processes”.

Along these lines, lie the findings of the associate professor, Thomas Bartzanas, of the Department of Natural Resources and Agricultural Engineering, perfectly expressed in the statement that “the economic recession has made plenty of young people turn to the agricultural sector. Notwithstanding the fact that the new generation has, certainly, gained a good deal of knowledge, with respect to the new technology, they are in furher need of assistance and a piece of advice, on how to take advantage of that means, for their own benefit. In general, there is a lack of interconnection between science and production and indeed, it is this connection not being included, which is the one that will transfer technology onto the plot of ground, the factory premises, etc. In the light of this direction, AUA is to enter “the heart of production” and train all people who get involved with agriculture, so as to take every necessary steps, providing them with the proper equipment. Our long cherished purpose is the creation of a state -of- art, according to which, production will have no adverse effects on the environment, which further means that the farmers will be capable of acquiring new knowledge. Needless to say that, the initiation of the project in the aforementioned areas, has also appealed to the interest of the producers, the associations and industries”.

However, a rather “sluggish” adjustment to the modern ways of performing the agricultural activities, is attributed to a great extent, to the unsatisfactory integration of the new techniques and technologies in the productive procedures. The model of the agricultural production does not require an outstanding production, instead of that, it can contribute to reaping the maximum profit margin that could, reasonably, be achieved; in other words, the rational management of all inputs and outputs of the system under discussion. To put it another way, it is imperative that a coordinated effort is made, for the elaboration of a more realistic and feasible proposal, within the framework of a new model of a complete agricultural production and quality assurance of agricultural products, directed towards the sustainable development, as well as the protection of the consumer.

As far as the fulfilment of such an objective is concerned, the concept of Precision Agriculture has been developed and met with great response, on a global level, according to which, Information and Communication Technology (ICT) is used for the precise monitoring and control of all the inputs on the cultivation system, in addition to the accurate programming of outputs. Meanwhile, the International Organizations and Bodies, which make for the formulation, implementation and promotion of the priorities of the economic policy, recognizing fully, at present, that there is a strong need for economic boom, in a total harmony with the rational use of natural resources, have laid the Circular Bioeconomy principles. That emerging field of Circular Bioeconomy refers to the sustainable and circular managegement of human resources, being in respect of sectors such as agroindustry, bioenergy and waste management.Under the framework of the Action “ Regional Excellence”, AUA is really getting ahead in the foundation of advanced research infrastructure facilities, in the Region of Central Greece, focusing on technologies and systems of smart agricultural production and circular bioeconomy.That proposed research building facility shall expand, combine and provide networking between the fundamental research infrastructure of the Agricultural University of Athens, across the Kopaida surroundings (Aliartos) and the new building complexes of the new departments established in Thebes and Amfissa.

To become more specific, the suggested research infrascructure will center upon the following priority axes:

Furthermore, the new research infrastructure, as mentioned in the above statements, is to be set up in the following cities of the Region in question, in which, the relevant departments of AUA function, displaying the extension of the Institutional settings.

Firstly, Aliartos is comprised, with a view to creating a management unit of spray drift, a monitoring unit of cultivations, by means of smart agriculture systems, a composting and utilization unit, for the production of soil improvers and biostimulants. Automation of a model greenhouse structuring, with compliance to climatic change is stressed, as well.

Secondly, Thebes is referred to, with the prospect of establishing an integrated management scheme of sustainable supply chains, and the development of innovative entrepreneurial practices and solutions provided, too.

Thirdly, Amfissa, is associated with a designing and development unit of packaging products of agrifood, by the support of 3D printing technologies.

In conlusion, the main objectives of the research infrastructure planning are described as follows: Providing access to researchers and anyone interested in the agrifood sector, through a wide range of services and networks, reflecting the geographical spread of infrastructure, on a regional level, incorporating the natural and digital content of any kind of means, in order to promote Smart Agriculture to the whole ecological agricultural product. Besides, the coverage of the lack of interconnection between research and marketing in the agrifood sector, of the Region of Central Greece, in oder to put the gradual assimilation of knowledge, related to Smart Agriculture and circular bioeconomy into practice, that is to be properly used, by the farmers of the region, is another valuable perspective.Needless to say that fostering interdisciplinary research and innovation in the pertinent scientific fields, since the food chain demands the combination of all the agricultural sectors, including plant production, livestock breeding, management of agricultural waste,  traceability, supply chain and circular economy, becomes a vital purpose, too.Last but not least, the encouragement of collaboration with the industry of agrifood products and the relevant national and european building facilities is launched.

“Smart Agriculture” at the disposal of Greek Farmers
Internship for the Students of the 10th semester funded by ESF (European Social Fund) ESPA
Applications turned in until February 15
Νew series of Data Analysis and Data Exploration lectures
Investigating the genetic basis of autochthonous Greek bovine breeds
The Agricultural University of Athens participates in the Greek node, METROFOOD-GR, of METROFOOD-RI
Rectorate's wishes
The Agricultural University of Athens, coordinates the European project - DIgital TEChnologies
Νew postgraduate course titled “PROTECTED CULTIVATION – HYDROPONICS”
Applications to the course can be submitted up to December 15, 2020
The research program QuaAuthentic_GR verifies the authenticity of olive oil and honey
Distinction of iGEM Athens 2020 student team in the global iGEM synthetic biology competition