Meeting for the Varibopi Reset Initiative. 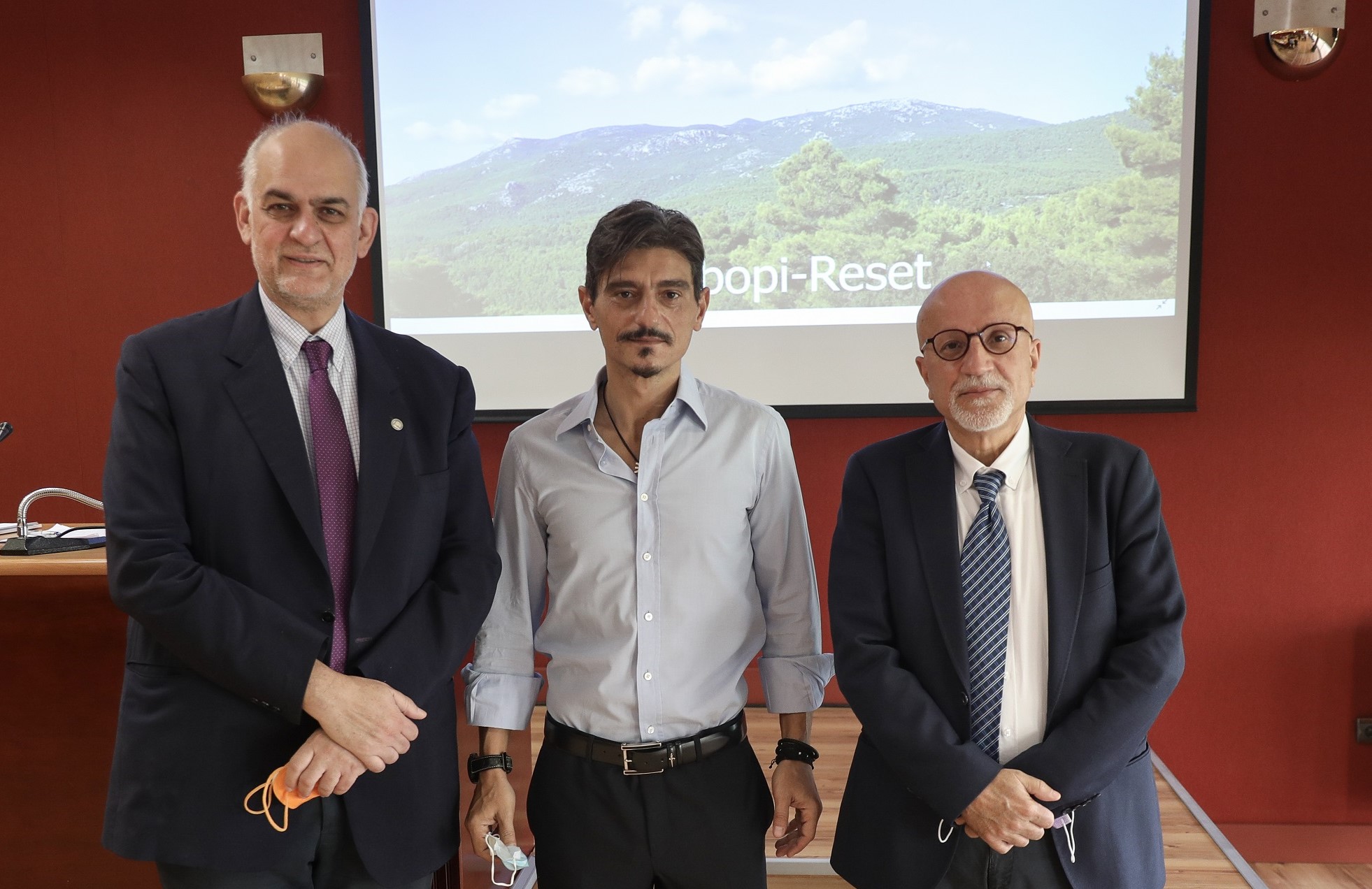 Meeting for the Varibopi Reset Initiative

The Rector of the Agricultural University of Athens, Professor Spyridon Kintzios and the Vice Rector for Research and Lifelong Learning, Professor Stavros Zografakis, honored as the formal guests, the event held on Friday, the 22nd of October for the Initiative entitled “Varibopi Reset”. Τhe kick-off meeting took place  at the central amphitheater of the VIANEX Group, on the site of Varympompi, by participating either, by means of physical appearance, or through teleconference of at least 98 business representatives, as the result of the Initiative undertaken by the  President and Managing Director of the VIANEX Group, Mr. Dimitrios Giannakopoulos. That meeting pertained to the information of all the participants, as well as the necessity for finding private resources concerning the restoration of the burned areas in the suburb of Varympompi.

In the first place, Mr. Dimitrios Giannakopoulos mentioned at his greeting that the Agricultural University of Athens provides a guarantee for that project. This is indeed, proved by the participation of the Institution into a great deal of Research Programs besides the constant Academic Agreements and Collaborations that have been conluding.

In particular, Mr. Dimitrios Giannakopoulos with a view to the reforestation, urban renewal and restoration of the suburb of Varympompi, made reference to the fact that the Agricultural University of Athens is going to elaborate a complete scientific redevelopment study of the environs. A large number of companies will contribute to the accomplishment of such a detailed and sophisticated project; these enterprises reacted positively to the call of the VIANEX Group, with the ultimate objective of restoring the burned areas in the suburb of Varympompi and “going green" again.

Subsequently, the Vice Rector for Research and Lifelong Learning, Professor Stavros Zografakis, presented the key aspects of the Study. Specifically, the Vice Rector clarified that the working group to be established will consist of Professors and scientific personnel of all the AUA Departments, especially of the competent members whose subject modules are closely, related to the above issues.

At the next stage of his presentation, the Vice Rector for Research and Lifelong Learning, Professor Stavros Zografakis, analysed the most important Actions which will be associated with the development of Μonitoring Αctions, inasmuch the forming of pertinent Actions for the restoration of the burned forest ecosystems, the public suburban and urban areas, as well as the cultural sites in the surrounding area of the suburb of Varympompi, including the planning οf the forest management with the purpose of the fire protection.

The parameters that will be involved in the fundamental objects of the Study are described as follows:

At the conluding part of his presentation, the Vice Rector mentioned that the meetings to be scheduled, will be held at the premises of the Agricultural University of Athens with the special offer of the Working Groups, that will be set up for the implementation of that great effort.

Career-life management skills
on Wednesday 1st of December 2021
Memory techniques and the preparation of the exam courses with emphasis on long-term memory (LTM).
on Tuesday 23 November 2021
Invitation of the Hellenic Agricultural Academy (HAA)
on Monday, 22/11/21 at 12.00 hour
Drug addiction and its consequences
Wednesday 10th of November 2021, 17:00-18:00
Online workshop entitled “Sustainable Production of Biobased Products in the Bioeconomy Era” in the framework of the national project “Research Infrastructure on Food Bioprocessing Development and Innovation Exploitation – Food Innovation RI”
Agricultural University of Athens, Wednesday the 10th of November 2021, time 09:00-17:00 (CET)
Roles in the family and family relationships
3rd of November 2021, 17:00-18:00
The Career Services Office of AUA is inviting all students to attend the seminar: "Managing interpersonal relationships”
on Monday 25th of October 2021, 16:00-17:00
Workshop of the project “Nutrisense” titled "New technologies in greenhouses with emphasis on hydroponics and nutrition - fertilization of crops"
Tuesday, October 19, 2021 at 9:00 a.m. at the Amphitheater of the Library of AUA
Online conference: The sustainable agriculture in the era of 5G
October 12, 2021, Agricultural University of Athens
Specific reading difficulties and memory functions, with emphasis on short-term memory (STM).
Tuesday 19 October 2021