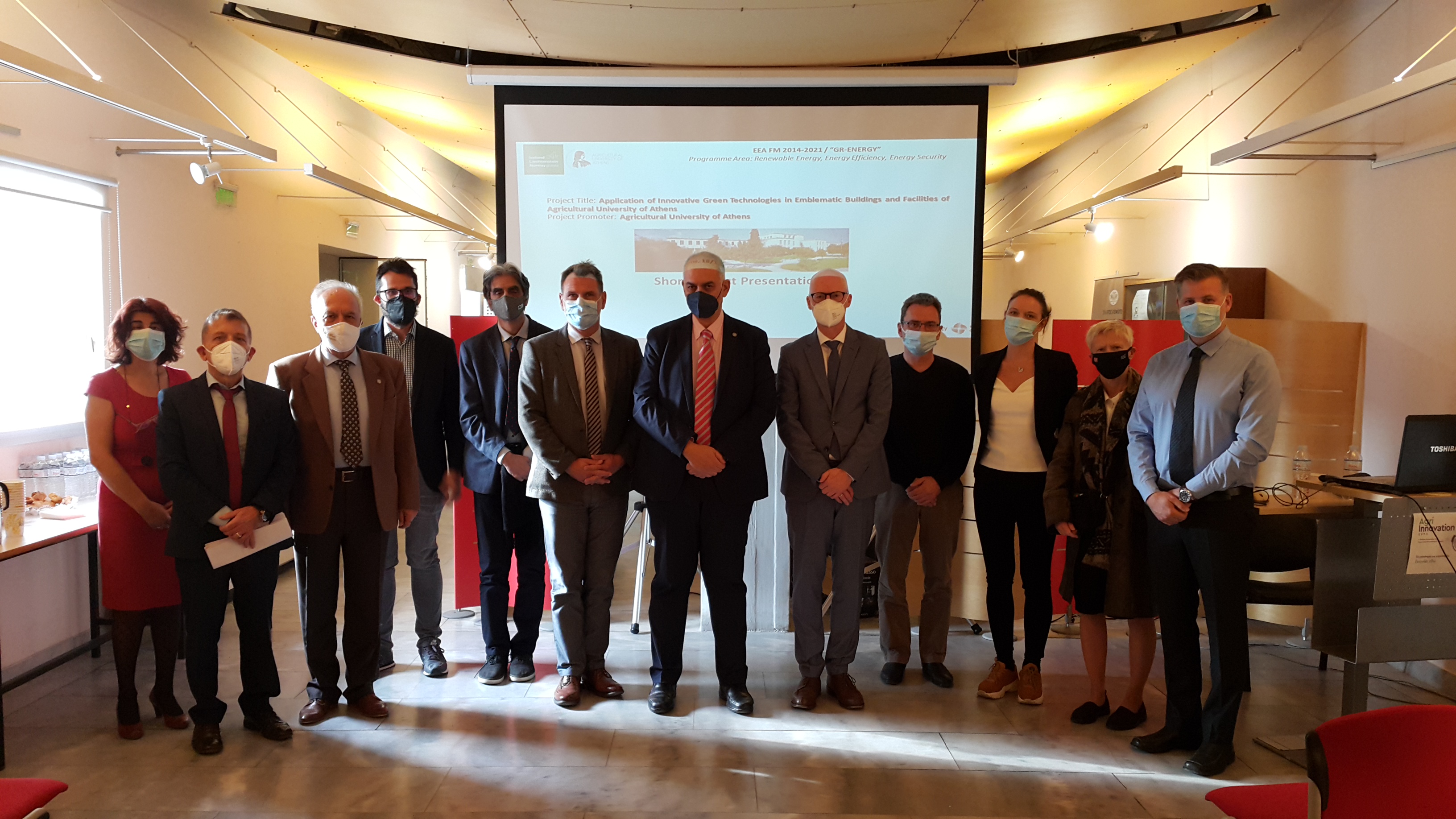 A much promising delegation visit of the European Economic Area (EEA) Member States took place on Thursday the 18th of November 2021 at the premises of the Museum of Agriculture in the Agricultural University of Athens, under the framework of providing valuable information on the part of the Greek University upon the new approved Project entitled: “Application of Innovative Green Technologies in Emblematic Buildings and Facilities of the Agricultural University of Athens”, being fully funded by the European Economic Area.

Indeed, the Rector of the Agricultural University of Athens, Professor Spyridon Kintzios, the Vice Rector for Finance, Programming and Development, Associate Professor Iordanis Chatzipavlidis, Dr. Dimitris Manolakos, Associate Professor of the AUA Department of Natural Resources Management and Agricultural Engineering, being also the Project Manager of this Action, along with the Deputy Head of the AUA Directorate of Technical Services Adamantia Aristopoulou, who is the contact person for this Project, welcomed with pleasure Jon Erik Strømø, Head of the Donor Delegation and Director of the EEA and Norway Grants of the Section for Central Europe, as well as Anne Havnør, Senior Adviser of the aforementioned Section, both on the part of the Norwegian Ministry of Foreign Affairs.

In addition, Karí Jónsdóttir, Advisor on Political and Cultural Affairs and Deputy Head of Mission, as a representative of the Embassy of Iceland in Oslo, Herakles Alexopoulos, the General Secretariat for Public Investments and the NSRF, Head of the Special Service EEA FM, hereinafter referred to as the “National Focal Point” representing Greece, of the Hellenic Ministry of Development and Investments,  Markos Damasiotis, Head of the Development Programmes Division of the Centre for Renewable Energy Sources and Saving (CRES), along with Konstantinos Patlitzianas, Program Coordinator of the Program: “GR-ENERGY” of the European Economic Area Financial Mechanism for the period 2014-2021, were present at the meeting.

Besides, the European Union and the partners who are members of both the European Economic Area and the European Free Trade Association (EFTA), namely Norway and Iceland, are further linked to a series of “northern policies” and forums focusing on the rapidly developing north areas of Europe and the greatest part of the Arctic region.

•    Replacement of lamps with LED lamps,

•    Fitting of a micro network to which the existing installations of photovoltaic systems will be connected,

•    Positioning of chargers for electric vehicles as well as three sheds arrayed in photovoltaic solar modules with a total installed capacity of 20 kWp,

•    Ιnstallation of a monitoring and control system of the energy consumption of the building in real time.

Moreover, regarding the Roussopoulou building, the following technical interventions are provided for:

•    Instalment of a heat pump of high energy efficiency related to the regulation of the building environment,

•    Setting up the replacement of lamps with LED lamps,

•    Placing photovoltaic system of 20 kWp capacity that is to be fitted to the micro network.

In conclusion, the above involvements will conduce to the significant reduction in costs of the Agricultural University of Athens related to electricity, on the one hand and the increase of the penetration of renewables to the energy balance as well as the reduction of greenhouse gas emissions, on the other hand making it a fruitful Project.